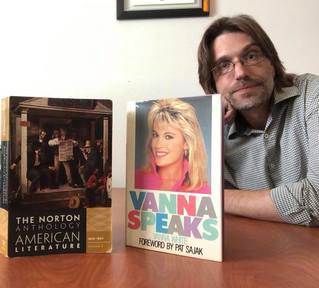 ​Scott Fynboe, Ph.D.
Campus: Pruitt
Office: J-311
Email: sfynboe@irsc.edu
Phone: 772-336-6299
​Biography: Originally a radio DJ from upstate New York, Dr. Fynboe holds a Ph.D. from the University of Southern Mississippi, as well as degrees from Binghamton University and Broome Community College.
Dr. Fynboe’s academic background is contemporary American and British literature, with concentrations on Allen Ginsberg and creative writing. He is also an American pop-culture scholar with a deep passion for cinema.
To date, Dr. Fynboe has written critical pieces on the use of antiheroes in superhero films, feminism in The Nightmare on Elm St. series, and “alternative” Santa Claus’ in Christmas music. Currently he is working on pieces exploring: gamification in the classroom, the aesthetics of Friday the 13th’s Jason Voorhees, and how 1990s music videos can be taught as contemporary literature. His poems have appeared in The Los Angeles Review, Drunk Monkeys, and The Sow’s Ear Poetry Review. He has also led workshops on writing and performing narrative poetry at IRSC’s annual Writer’s Day.
Outside of the classroom, he enjoys watching movies, playing video games, and raising dental floss at his Montana ranch during the summer. (Yippy-I-O-Ty-Ay!)
Classes: ENC1101, ENC1102, AML2010, LIT1000
Teaching Quote: “Those that know don’t close the door on those that don’t know.” – The Gourds, “The Education Song” 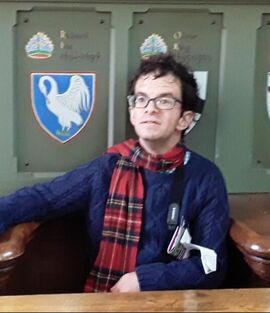 Chris Fasolino
Campus: Mueller Campus
Email: cfasolin@irsc.edu
Phone: 772-226-2500
Biography:  Chris Fasolino is from New York State and taught English and Art History for twelve years at SUNY Plattsburgh before relocating to the Treasure Coast.  In addition to his work for IRSC, he teaches Art History classes at the Vero Beach Museum of Art, and he is a contributing writer for Vero Beach Magazine.  He has written a historical adventure novel entitled Men of Promise; the website for the novel is captainwestbooks.com
Classes:  ENC1101, ENC1102
Teaching Quote: "If you hear a voice within you saying, 'You are not a painter,' then by all means paint-- and the voice will be silenced."-- Vincent van Gogh.  I believe the principle of this quote can help students as they learn to write more effectively, and it helps me as a teacher to maintain a positive and creative atmosphere in the classroom. 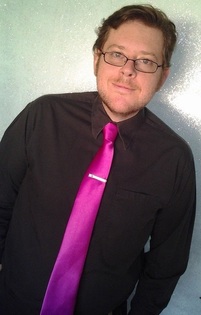 Jonathan Glover, Ph.D. (Mueller Discipline Leader)
Campus: Mueller
Office: D 219
Email: jglover@irsc.edu
Phone: 772-226-2530
​Biography: Dr. Jonathan Glover earned his PhD in English with a focus on postcolonial literature and theory from the University of Florida in 2011. He also holds degrees from the University of Central Florida and Florida Gulf Coast University. He has published articles and book chapters in the South Atlantic Review, Race and Displacement, the Florida Philosophical Review,  the Center for Media and Journalism Studies, Rhizomes, and the UF Digital Library of the Caribbean. His more recent endeavors include the establishment of Public Spheres: Engaged Scholarship Across the Curriculum, a faculty group and forthcoming online journal dedicated to academic service learning/applied learning in theory and practice. Dr. Glover's work with academic service learning has earned him an IRSC Foundation Endowed Teaching Chair Award (2015-2018) and the Spirit of Service Learning Award (2014). His other interests, both personal and scholarly, include underground music, independent film, and narrative-driven video games.
Classes: ENC1101, ENC1102, American Literature to 1865, American Literature after 1865, & Intro to Literature Lit 1000 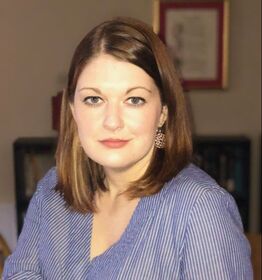 ​Brenna K. Heffner, Ph.D.
Campus: Main
Office: J 111
Email: bheffner@irsc.edu​
Phone: 772-462-TBD
Biography: Hailing from Cajun Country, Dr. Heffner is a new full-time faculty member at IRSC. She earned her doctorate from the University of Louisiana at Lafayette, where she wrote a Cultural Studies dissertation that focused on the intersection between reader-response theory and popular culture. All this is to say that she was able to write about two things she loves: Jane Austen and knitting. With a background in Classical Languages and Folk Studies, she enjoys teaching Shakespeare, British literature, poetry, and writing through a cultural studies lens. Her interests include video gaming, reading for pleasure, camping, board games, cooking, and hanging out with her husband, sassy black cat, and perpetual calico kitten.
Publications: Edmund Spenser’s Married Chastity: Ovid, Feminist Coding, and Rhetorical Androgyny in Book III of The Faerie Queene.
Education:
Ph.D. in English, University of Louisiana at Lafayette
M.A. in Folk Studies, Western Kentucky University
B.A. in Classical Languages, Vanderbilt University
Classes: Enc 1101 & Enc 1102
Teaching Quote: “If he [the teacher] is indeed wise, he does not bid you enter the house of his wisdom, but rather leads you to the threshold of your own mind” (Kahlil Gibran). Marvin Hobson
Campus: Pruitt
Office: E 320
Email: mhobson@irsc.edu
Phone: 772-462-7921
​Biography: Mr. Marvin E. Hobson has been an educator since 2002 with experience in teaching English and Reading at the middle and high school levels. He started at Indian River State College (IRSC) in 2007 as an adjunct, and in 2008 he became an instructor of Developmental English in the Learning Assistance Department. He was promoted to Assistant Professor in 2011 and Associate Professor in 2014. In addition to enthusiastically teaching Developmental English, he has also taught Developmental Reading and Student Success. Most recently, English Composition has been added to his repertoire. On August 15, 2012, Mr. Hobson was awarded IRSC’s coveted Endowed Teacher Chair. He is extremely elated about his project that created and established the Zora Neale Hurston (ZNH) Center for Writing Across the Curriculum, which introduces students to job-specific writing opportunities while preserving the ZNH legacy of ethnographic writing.
Mr. Hobson began his studies at the State University of New York (SUNY) at Farmingdale, where he received his A.S. in Business Administration while working for Chase Bank. Then, he transferred to the SUNY University at Albany. He went on to earn a B.A. in English Literature and a M.S. in Reading Education while working as an intern for the New York State Education Department and a grants administrator for the New York Health Department. Currently, he is working towards a PhD. in English Literature and Criticism from Indiana University of Pennsylvania, where his triangulated dissertation will focus on the ethnographic and biblical representations in the dramas of ZNH, S. Ansky, and Tyler Perry.
Mr. Hobson serves on various committees at IRSC such as the Academic Review Committee, the Honors Program Committee and the Institute for Academic Excellence – Reading Committee. Most recently, he served as President of the Florida College English Association, a statewide organization which unites college and university faculty and graduate students in an annual conference, which Mr. Hobson and IRSC hosted in October of 2014. Celucien L. Joseph, Ph.D.
Campus: Main
Office: J 212
Email: cjoseph@irsc.edu
Phone: 772-462-7708
​Biography: Dr. Celucien L. Joseph earned his Doctor of Philosophy from the University of Texas at Dallas, where he studied Literary Studies, with an emphasis in African American Literature, African American Cultural and Intellectual History, and Caribbean Literature and Culture. Dr.  Joseph also holds degrees in religious and theological studies (M.Div., M.A.) and French language and literature (M.A.). He is interested in the intersections of literature, history, race, religion, and history of ideas. His academic research and teaching interests include African American Literature, African American Cultural and Intellectual History, Comparative Literature of the African Diaspora, Francophone Studies: Africa and the Caribbean, Black Internationalism, Postcolonial Literature and Theory, Literary Criticism, Theory and Method in the Study of Religion, Pragmatic Religious Naturalism, Philosophy of Religion, Liberation and Constructive Theologies.
Dr. Joseph is the author Race, Religion, and the Haitian Revolution: Essays on Faith, Freedom, and Decolonization (2012), From Toussaint to Price-Mars: Rhetoric, Race, and Religion in Haitian Thought (2013), Haitian Modernity and Liberative Interrruptions: Discourse on Race, Religion, and Freedom (2013), God Loves Haiti (2015).  His forthcoming book is entitled Thinking in Public: Faith, Secular Humanism, and Development in the Writings of Jacques Roumain (Wipf and Stock Publishers). Dr.  Joseph joined the IRSC faculty in 2013. He is the Co-Advisor to the Haitian Cultural Club. He lives in Port Saint Lucie with his family.
Classes: ENC 1101 & ENC 1102

​Steven Knapp
Campus: Pruitt
Office: J 320
Email: sknapp@irsc.edu
Phone: 772-336-6277
​Biography: Steven Knapp is an Assistant Professor of English at Indian River State College in Fort Pierce, Florida.  Professor Knapp earned his Master of Arts degree in English at Florida Atlantic University in Boca Raton, where he also taught as a Graduate Teaching Assistant.  In 2002, Professor Knapp took a full-time teaching position at Indian River State College.  Professor Knapp has traveled widely in South America.  In 2006, as a participant in Rotary International’s Grants for University Teachers program, he served as a visiting professor of English in Lima, Perú.  Also, he has worked on a number of educational initiatives with Florida’s Department of Education.  Since 2008, Professor Knapp has been volunteering for the Florida Department of Education on its secondary and post-secondary alignment project to help more high school students graduate college-ready.  Professor Knapp has devoted a good part of his scholarly work to studying authors G. K. Chesterton and Zora Neale Hurston, and he frequently speaks about Hurston and her writings.  He received IRSC’s Faculty-of-the-Month award in 2011.  Professor Knapp also received IRSC’s Instructional Innovation Award—2009, River Award—2011, and Pioneer Award—2012, for his contributions at IRSC.
Classes: English Composition I, English Composition II, and World Literature I.
Teaching Quote:   “Neither in the world of politics nor that of literature, then, has the rejection of general theories proved a success.  It may be that there have been many moonstruck and misleading ideals that have from time to time perplexed mankind.  But assuredly there has been no ideal in practice so moonstruck and misleading as the ideal of practicality”  (G. K. Chester).